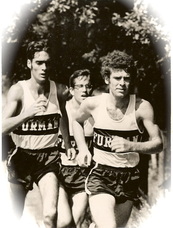 ​A former prep cross country standout from North Carolina, he was co-captain of Furman’s cross country team and later competed for the world renown Florida Track Club, which presented the opportunity to train with many of the nation’s best runners including  Olympians Frank Shorter, Marty Liquori and Dick Buerkle. Mike placed third at Atlanta's Peachtree Road Race and also finished among the top 12 two other times. He later competed for the Atlanta Track Club and then founded Racing South Magazine and the Racing South Competitive Team, which became one of the nation’s best post-collegiate teams (see photos below). 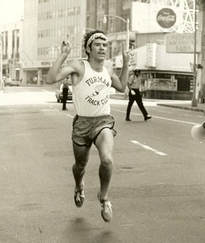 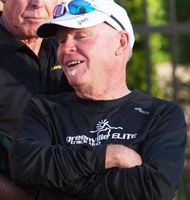 photo credit: Peter Thompson
While working at Nike in Portland, Oregon, Caldwell had the unique opportunity to observe two of the nation’s top distance coaches in Alberto Salazar (Nike Oregon Project) and Jerry Schumacher (Bowerman Track Club). He worked closely with renown middle-distance coach Bob Williams, a former University of Oregon All America in the steeplechase and the coach/mentor of Elijah Greer--1:47 800 meters as a high school junior and later NCAA 800-meter champion both Indoor and Outdoor. He was also privileged to observe and learn from Britain's (and almost USA citizen) Peter Thompson, who developed "New Interval Training". 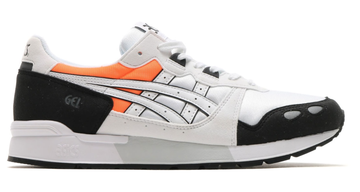 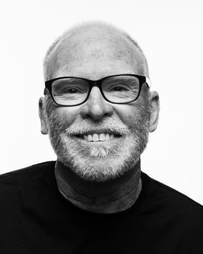 photo credit: Phillip Garcia
Caldwell was a founding board member of RunPortland and advisor for Lake Oswego (Oregon) High School’s cross country and track & field teams.  Retiring from the corporate world after a 25-year career in the athletic footwear and apparel business, Mike returned to his alma mater, Furman University, in 2009 to coach the university’s mid-distance and distance runners through 2012.

After retiring from Nike and arriving at Furman in 2009 with only six returning runners on the 2009 Furman Cross Country team, under his leadership the Paladins improved from a sixth place finish in the Southern Conference to a surprising third place in 2011. He coached 18 All-SoCon runners, three SoCon individual champions and 19 All Freshmen SoCon performers in only three seasons. The Furman men's Distance Medley relay broke the SoCon Indoor Championship record in 2012 while finishing third. His men XC runners produced 13 of the top all-time 25 times over 8K in Furman's long XC history (through the 2011 season).

Mike has also coached a few elite high school athletes, including former Clemson and Arkansas standout Logan Morris--two-time FootLocker XC finalist (2014 & 15) and 9th in US in 2015. As a prep, Logan also placed 6th in the 2016 New Balance Nationals' 5,000 with a time of 16:53.8 for All American honors.

Just a few of the many talented athletes who competed for Caldwell's Racing South Competitive Team.